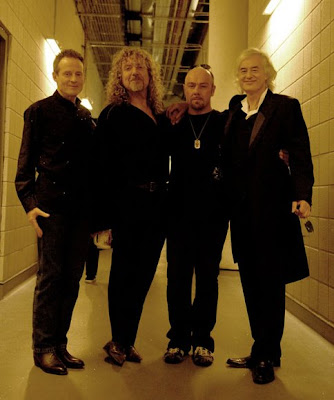 last month, from none other than jason bonham himself, came the news that led zeppelin was back in the studio working on new material. well, almost. robert plant was on tour and wasn't part of the page, jones and (jason) bonham collaboration. but there was hope that once his tour with alison krauss was done, he'd join the group and we'd see a new album and/or world tour soon enough!

speculation ran so high that last week a british tabloid, the sun, ran a story to the effect that plant agreed to join them for a world tour! file that one away under "way too great to be even close to true." plant was so incensed by the rumors that today he issued an official press release that artfully denied his involvement with the reforming group.

artfully? well, me thinks he protest too much. especially the part about no plans to do anything for 2 years following the end of his current tour with krauss. looked at another way, plant could be available in 2010! but the world waits for no one!

even more rumors are circulating about a possible led zeppelin tour without plant. the band is auditioning possible replacements, and the current favorite - of all things - an american front man!

Posted by rundangerously at 7:19 PM

I understand world travel can be exhausting... especially when you stay in 4-star suites every night! But Old Man Robert needs a whole two years off?

I betchya he'll eventually give in, lay down vocals for the album and agree on touring. Rock and Rollers can rest when they're dead! (Ask Jerry.)