seven years ago today the ugly face of evil manifested itself and a handful of terrorists, in a barbaric act of cowardice, managed to kill almost 3,000 innocent people in one morning.

today there is still a gaping hole where the towers stood. someday new construction will replace that empty space with new towers. someday a memorial will finally be constructed to honor the victims. today, as in anniversaries past, ceremonies will be held at ground zero to honor the fallen. this anniversary will have the two presidential candidates in attendance (which explains the high level of security i witnessed on the way to the office this morning). 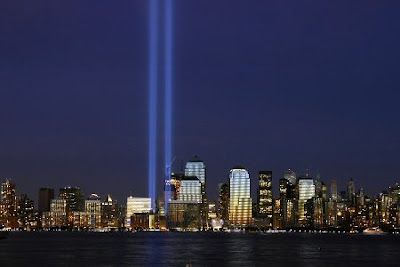 here is a great video clip of the tribute in light, viewed from the brooklyn promenade, from ny1 news.

also, here is some great news coverage (and a video clip) of the memorial services at ground zero, from ny1 news.

Posted by rundangerously at 7:11 AM

Very cool post. I will never forget and remember that morning so clearly. I read on line about the first plane and was next store at the pharmacy (I was working in patient at the hospital) and actually saw the second crash as it happened.. just like the picture you posted.

Best of luck with your training and that LONG run you have coming up.

wow man, never knew you and Pat were so close to the towers. I pray for each and every life loved one lost and especially for keeping you two safe...where would we be without this blog?

I remember that morning but for different reasons than the world remembers it. It is a very difficult day to remember
http://becauseitisi.blogspot.com/2007_07_01_archive.html

We will never forget, thanks for sharing this personal experience.

I never forget, even if italian i am very close to your Country.
Unbealivable but the speeling of the word verification sounds like: eh beat them!

it's hard to believe seven years have gone by. every day i walk to work i still find myself looking at the skyline and find it hard to believe the towers are really gone forever!