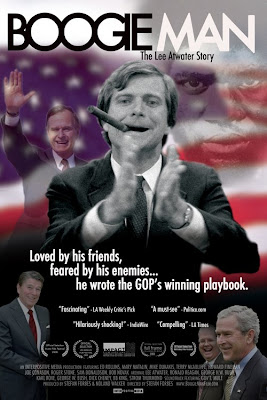 "boogie man: the lee atwater story" is a must-see film for any self-styled political junkie. interestingly, political affiliation doesn't really matter in watching this film. one caveat, however, it is not the seemingly even-handed treatment the reviews generally describe it as;

for example, this is from the brief ny times review:

'Like a trompe l’oeil painting “Boogie Man: The Lee Atwater Story” deftly positions its subject as both the savior of the Republican Party and the Antichrist of American politics.'

optical illusion, or not, for lefties, lee atwater was the original darth vader of politics (and the man karl rove learned all his dirty tricks from all those years ago). on the other side, conservatives worshiped atwater as a man that always managed to win - when the winning was impossible.

while i enjoyed watching this film - especially all those nifty 1980's video clips that reminded me of the hair and clothing styles of my formative years - ha - i couldn't believe how much was left out. not so much the biographical story line - but the list of characters that could have provided the color commentary.

for a man that profoundly shaped the political trajectory of the bush family - not one sound bite from the current president, nor the first president bush? not one current interview with karl rove? not one interview with james carville? carville's wife, mary matalin does provide some great and insightful commentary. but james carville was the true re-embodiment of lee atwater. a year after lee atwater's untimely death at age 41, carville emerged on the scene, set up the war room, and got bill clinton elected president. while karl rove is seen as atwater's progeny, it took two election cycles for him to eventually emerge in that role.

most of the reviews are overwhelming positive, especially as i mentioned, taking pains to evoke the even-handed treatment of atwater from friends and foes alike. still, i wonder why the bulk of the commentary is from the other side of the political spectrum. two liberals writers (joe conason and eric alterman) provide significant commentary throughout, the vanquished michael dukakis (and an obscure early political casuality, tom turnispeed) also get a good deal of screen time, and snippets of former dnc head terry mccauliffe in the back seat of limo. on the republican side, ed rollins, roger stone, and robert novak are pressed into service to tell atwater's story!?

maybe i read too much into this - but there was not one word from his own family?! nothing about lee from his wife (or children). but the most disappointing aspect of the film was the utterly nasty finish - with the mawkish hearsay offered by rollins to the effect that the bible lee supposedly read so passionately during his last years on this earth was found among his personal effects, still wrapped in plastic, according to what he was told by atwater's widow! what can one say to the implication shouted out there that atwater's entire born again conversion was all some sick cynical pitiful act?

i walked out of the theatre with the bard's imortal lines on my mind, "i come not praise caesar, but to bury him."

fwiw, pat and i attended the inauguration ceremonies of the first president bush - since she was living in washington d.c. at the time. pat, a big dukakis supporter, was not too keen about that - but above and beyond the call of duty, she humored me (a bush man at the time).

Posted by rundangerously at 7:32 AM