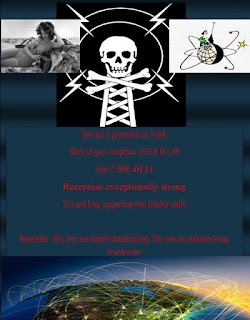 it's not too often one can log a pirate and legit broadcast of the same station in very the same week! that was something new for me!

thanks for both broadcasts "free thinker radio!"

This is my 5th eQSL from a pirate radio station in the last month!

Pirate radio is alive and well on the shortwaves!
Posted by rundangerously at 7:34 AM 0 comments Links to this post

still no post-surgery running, another week+ to go -- argh!

It's been almost 2 weeks since my last run.  I ran 5+ miles on Tuesday, June 16, the day before the cataract surgery on my right eye.  The following Wednesday the left eye was operated on.  Both surgeries went well, but the prescribed post-op inactivity is driving me nuts (ironic in the sense that i'm still not cleared to drive - haha).

The doctor wants me to wait two weeks until I can get back to running again (which pretty much means nothing faster than walking until next Wednesday).  And the first few runs should be on the track (or treadmill) until I get back in the groove of things.  He has a pretty conservative view about exercising after the surgery (but who am I to quibble since I still have 1 suture in the right eye and 2 in the left that need to be removed).

Tomorrow I head back to the doctor's office for a follow-up visit and new the temporary eyeglass prescription.  My near vision has been completely corrected, but I'll still need to wear glasses for distance.  It'll still be a few more weeks before I'll be ready for a final prescription (as the eyes continue to heal and adjust), but in the short term... I'll be able to drive again :D

Stay tuned!
Posted by rundangerously at 1:55 PM 0 comments Links to this post

Last night I heard "Boom Box Radio" testing on 6925 kHz.  It came in loud and clear with a tape from an earlier show broadcast.  Part of the station ID coming out of a rap song at the bottom of the hour included the promo, "I come up here every Saturday night [which would have been tomorrow night] and play what I want...."  Just after the start of their next song the signal dropped and I lost the audio -- they literally pulled the plug on the transmission/test!

I emailed a clip of the reception and got back this excellent eQSL from DJ LT a little while later!

Thanks DJ LT - both for the eQSL and broadcast!!

This is my 4th eQSL from a pirate radio station in the last month!

"the crystal ship"
"voice of pearl harbor," and
"shortwave ghost"

Pirate radio is alive and well on the shortwaves!

Posted by rundangerously at 6:31 AM 0 comments Links to this post

Last weekend (sunday, june 21) the BBC broadcast a special half hour program specifically for the handful of individuals stationed in Antarctica (the British Antarctic Survey).  The annual mid-winter (local) broadcast happened to coincide with our summer solstice :D

The short clip (just under 3 minutes) is the end of the program, highlighted by "Baby It's Cold Out There" sung to conclude the transmission.  Apologies in advance for the poor audio.  This clip was included in the SWLing Post's, "Listening Across the Globe: 2015 BBC Antarctic Midwinter Broadcast," which collected clips of various receptions of the broadcast around the world!

The full broadcast can be heard, directly, via the BBC (however, it will only remain available for 30 days).
Posted by rundangerously at 11:00 PM 0 comments Links to this post 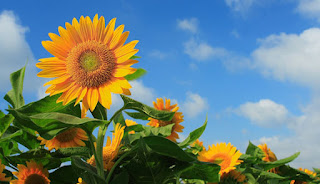 summer officially arrives here on the east coast in a few more hours - at 12:39 pm, in fact.  fathers day arrived at midnight!  can't remember when these two days last coincided.

i'm marking both days without running - midway between my two eye surgeries (right eye done last wednesday, left one this wednesday).  one the plus side, will get better vision - hurray!  on the negative side - no running (among numerous activities restricted). that's a major downer because there are so many great races going on!

on the conservative side, i won't be able to lace up my running shoes for 2 weeks following the second surgery.  that means i may not get back to running until the first week of july.  that's a lot of detraining to make up. but, taking the long view, it's not a big price to pay for getting better eyesight!

so that's where i'm at on this summer solstice/fathers day 2015!

and for all the dad's out there - happy fathers day!

Posted by rundangerously at 8:40 AM 0 comments Links to this post 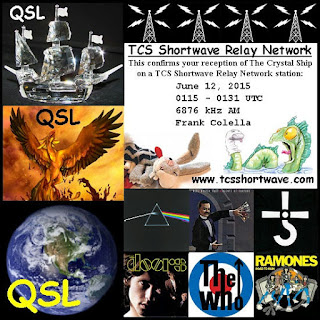 this week an eQSL from "the crystal ship" arrived in my mailbox.  it is my 3rd shortwave pirate radio eQSL in the last month or so (with hopes that a few more may arrive in the near future).  while various countries may be leaving the shortwave bands, pirate radio is alive and well. i've logged 7 domestic shortwave pirate broadcasts in the last month!  and there are plenty of european pirate broadcasters on the air as well, but logging them here is a stretch for me (- still, hope springs eternal) :D

update: "enterprise radio" and a few more pirate eQSLs.
Posted by rundangerously at 1:39 PM 0 comments Links to this post 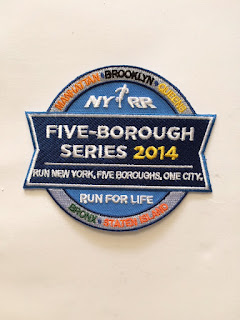 this post was almost sidetracked because of the cataract surgery this week - the 2014 grand prix series patch arrived on wednesday (same day as the surgery, in fact)!  this was the first back to back 5 boro series i've completed.  Prior to 2013, the last time i completed all 5 races was back in 2005 (when the series consisted of 5 half marathons across each boro).  Given the races i've missed in 2015, there won't be a 3 peat of the series this year!

last year, as a little bonus, a package of race magnets was included with the patch and certificate.  this year, there were no magnets.  but the patch is, i my opinion, way cooler than the 2013 version!

here is my short recap of the five 2014 races - which i posted back in October, following the last race - the staten island half. 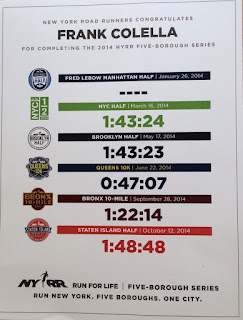 Posted by rundangerously at 12:13 PM 0 comments Links to this post

my cataract surgery - it's done! 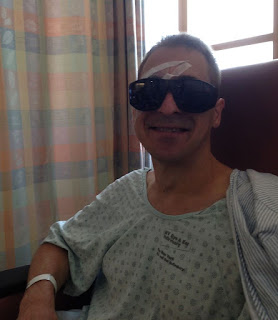 yesterday i finally had the cataract removed from my right eye!  finally, in the sense that my doctor diagnosed this problem in 2009(!) and through procrastination, anxiety, logistics - but mostly fear - i kcpt putting off the day of reckoning!  and since the eye surgery ice has been broken, the left eye is on deck for correction next week!  i'm happy - and relieved - to finally get this taken care of.  aside from the corrected vision itself, the one big benefit i should get from it is the restoration of my night vision.  i'll be able to drive at night again!

the only downside at this point is the recovery.  i can't do any running for two weeks.  i basically won't be doing any running (and especially races) for the next three weeks!  yikes!  that's going to be one tough stretch of withdrawal :O

but it's all good!
Posted by rundangerously at 8:15 AM 0 comments Links to this post

Labels: about me, general running 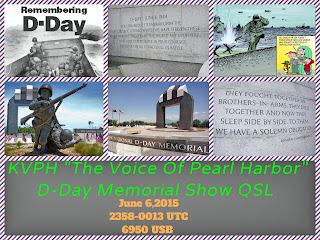 what a great surprise it was to get this eQSL card from the "voice of pearl harbor" on Saturday for their special broadcast last weekend to commemorate the anniversary of D-day!  not only is pirate radio alive and well - it's also patriotic!

in the last month or so I've logged at least six different pirate radio broadcasts.  this is the second eQSL card to arrive.  hopefully, there'll be a few more coming in - and i'll post pictures of them when they do

stay tuned :D
Posted by rundangerously at 9:32 AM 0 comments Links to this post 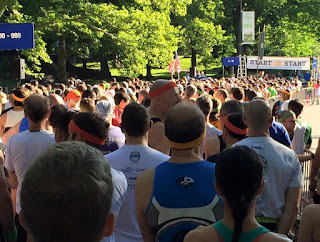 the retro 4 miler this morning was race #6 for me - only 3 more to go (and the volunteer requirement) for the 9+1 for 2016.  since i'm in the 2015 marathon, really need only 2 more qualifying races during the rest of this year!

i didn't get too many pictures this moring because my metro north ran train ran only once an hour (sunday schedule).  but i did catch up with some friends at baggage :D

here are the race results from nyrr 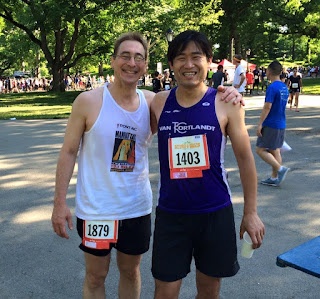 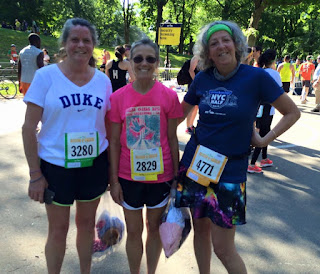 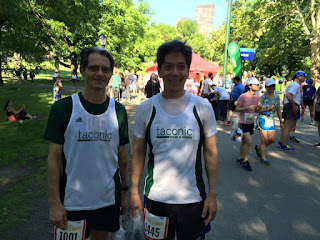 and here are a couple more photos up on facebook.
Posted by rundangerously at 10:00 PM 0 comments Links to this post 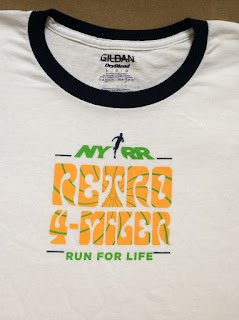 this afternoon went over to the nyrr to pick up my shirt and bib for the retro 4 miler on sunday.  normally i pick up my race stuff on thursdays - so it was a bit strange to find myself there on a friday, with the weekend ahead (instead of another work day)!  in addition to the retro styled tee shirt (complete with a blue collar), we got bright orange headbands :D

the 4 miler will be my 6th nyrr of the year on the road to 9+1 for the 2016 nyc marathon.  it's the first back to back nyrr race weekend in a while (for me).  i'll probably sign up for a volunteer opportunity this month to satisfy the +1 requirement.

as always, if you're at this one - say hello!
Posted by rundangerously at 10:30 PM 0 comments Links to this post 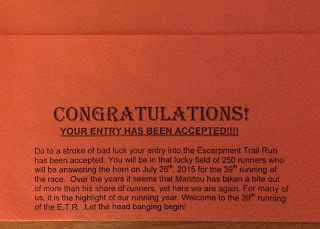 yesterday i signed up for my 6th escarpment trail run over the last 10 years!  i'm pretty excited about it, in fact.  at the end of the roughly 5 and a half hour+ journey next month (july 28th) across the challenging 30k trail - i will have logged over 100 miles over the wall of manitou and will get a coveted 100 mile shirt :D

hopefully i haven't jinxed myself!

Posted by rundangerously at 7:52 AM 0 comments Links to this post 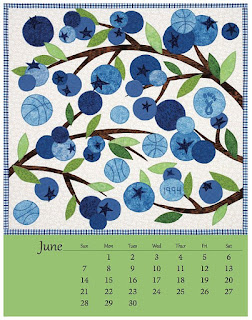 summer is officially here - even though today's weather is something of a retreat from the hot, humid conditions we had this weekend!  this month kicks off with a non-race - so to speak.  wednesday, june 3 is national running day.   there are running inspired events everywhere to mark it.  i'm hoping to get over to the nyrr and pick up one of the bandanas they're handing out!

this weekend, i'll be back at central park for the nyrr retro 4 miler.  on the heels of the healthy kidney 10k on Saturday, it's been a while since i've done back to back nyrr races! the retro 4 miler will be race number 6 on the road to 9+1 for the 2016 nyc marathon.

the following weekend starts off with "cook your buns" 3 miler in greenwich friday night.  i'm tempted to put this in the tentative column because the next morning i'm driving down to brooklyn for the good shepherd 5k in marine park.  this is a trip down memory lane, to my old neighborhood.  i've done this one a couple of times - but it's been at least a decade since i've run it!

the 2015 norwalk summer series kicks off the following saturday - with a pair of one mile races also scheduled for the same day (greenburgh in the morning and new canaan at night).  while the greenburgh mile is one of my all time favorite races, i'll probably do the norwalk + new canaan combo that day.  if there's anything left in the tank (figuratively and literally), i'll drive over to rowayton the next morning for the fathers day fun runs :D

on the last weekend of the month, it may be a trip back to central park for the front runners 5 miler.  i haven't nailed that one down yet, but i'd like to get another nyrr point - and bring my total up to 7 - and then look for a race to volunteer at for my +1 requirement.

here's how it looks so far.

as always, if you're at any of these events - say hello!

p.s. - i forgot to mention waveny xc summer series (tues. nights) and westport summer series (sat. mornings) which kick off during june.  hopefully i'll run a couple of those too :D
Posted by rundangerously at 9:27 AM 0 comments Links to this post