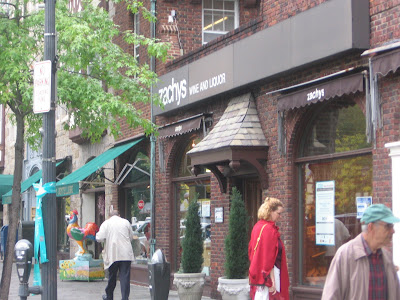 what a great start to the afternoon! i went over to zachys wine and liquor store because of the 3-day, $7 bottle of wine sale, and then stayed for the chilean wine tasting!
i picked up an eclectic, world-wide, mix of reds at the wine sale. two bottles of each:
heartland stickleback red 2006 (australia)
chateau beaumont premieres cote de blaye 2006 (france)
finnegan's lake cabernet sauvignon 2005 (usa)
luzon verde finca 2007 (spain)
monastell castano 2007 (spain)
after i took those bottles back to my car, i went back and enjoyed the wine tasting. the selection consisted of 2 whites and 5 reds - the highlight of which was undoubtedly almaviva rothschild & concha y toro 2005 red.
here is the complete list, and in order i tasted them:
cono sur vision sauvignon blanc 2006
arboleda sauvignon blanc 2006
veramonte primus 2005
montes alpha syrah 2006
concha y toro casillero del diablor reserva 2005
cabernet sauvignon punto nino 2006,
and, the aforementioned, almaviva rothschild & concha y toro 2005 red
the biggest surprise - and an unpleasant one at that - was the lack of malbec among the 7 reds! in region that has gained attention for the incredible malbecs its produced, to sample only cabs and cab blends (w/syrah and cabernet franc bases) was disappointing.
but, overall, there wasn't a weak selection in the bunch!
Posted by rundangerously at 1:26 PM

Wow, great sale! Wish I could have made it there.