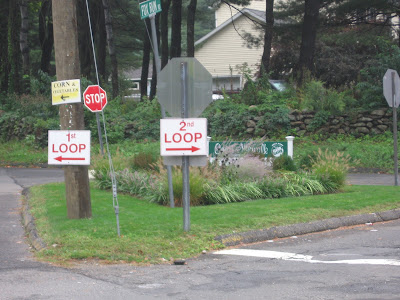 yesterday, instead of running the norwalk summer series half marathon, i volunteered and manned a water station. it was my third experience as a volunteer this year. the first, at the "run as one" 4 miler in april, was also a race i had planned to run. but, because of the injuries to my shin, i had to switch from runner to volunteer. just as well because i needed to volunteer at a nyrrc race, in addition to running 9 of them, to complete the new requirement for guaranteed entry into the 2010 nyc marathon.

the second, which i did with emmy, was at the sri chinmoy 6 and 10 day races, the following month. we had planned to spend at least 8 hours at that multi-day ultra - specifically, to satisfy the volunteer requirement for the vermont 100 miler in july. instead, we only completed 6 hours because they organizers let us go when the heavy rains arrived! even though i was short two hours - the vermont organizers took into consideration the "run as one" service to satisfy the requirement.

which gets me up to the third, yesterday at the norwalk half. emmy also volunteered. the rescheduled date conflicted w/her plan to run the queens half marathon the next day (a target race for her - and she did, in fact, win her age group there). rob, also registered for the queens half, decided to run both. don also joined them for trip down to queens. i never registered for queens because i had planned to run the tuckahoe challenge with katie.

the water station was just after the 5 mile mark (loop one) and just before the 12 mile mark (loop two) on the double loop course. we would see the runners twice during the race. i jogged the 1.1+ miles up to the aid station. emmy was right behind me, as was gail (who walked up with her dog, "mr. big"). when i got there, al had already set up the water table, filled the cups, and gotten things ready for the soon to arrive front runners. he stayed w/us until the first wave of runners passed on the first loop. 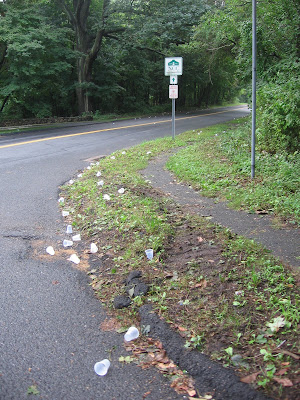 before the runners came back on the second loop, i took the opportunity to police all the water cups while emmy and gail manned the water station. after front runners passed on their second loop, gail headed back down to the finish. after the bulk of the second wave came through, i took care of the paper cups again while emmy took care of the water. when all but a handful of the runners had passed for the second time, al relieved us and we jogged back to the finish. 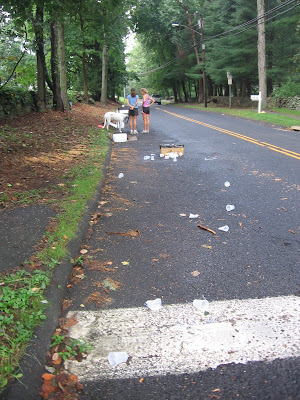 back at the finish did a little socializing. but the most fun was at the water station, itself, watching the runners come by. we got to see rob, roy, dawn (who had volunteered at registration before the race), kate, ronnie, joe, and anton - to name just a few - in action (it's the next best thing to actually running it :D)! and, congratulations to dawn and kate - who each ran all the races in the 2008 summer series!

here are the race photos.

Posted by rundangerously at 2:08 PM

Rob wants us 3 to man a water station next Sunday... how funny is that!! I thought he wanted to run the 30K...
didn't know he was into handing out water...

I thought volunteering was fun when I did it for the NYC Nike Half - glad you enjoyed your volunteer experience too!