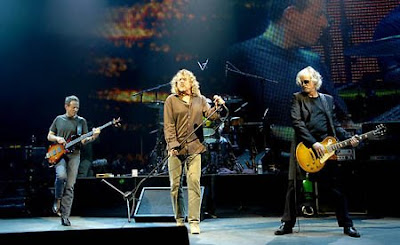 the one-night reunion of led zeppelin,
this past december at the o2 arena in london.

when i caught the headline this morning that led zeppelin was in a recording studio working on new material the first thought i had was, "yeah, everyone but bonham!" imagine my surprise when i learned the information for the story came straight from bonham - not john, but rather his son, jason! on the heels of jason's performance on drums at the reunion concert last december, no one can doubt he's the rightful heir to his dad's former position in the band.

but before fans can look forward to a new album of zeppelin material, there's the small matter of a missing band member - robert plant. he is, of course, currently on tour with the bluegrass musician, alison krauss. they also have an unexpected success with their album "raising sand." that's not to say plant won't join his former band mates in the recording studio to add his voice to the material once his tour is done. but that's just plain speculation at this point.

it's interesting to note that jason bonham revealed this news via an interview with a detroit radio station - but the surprise, aside from actually recording new material, was that the trio had been at together at work since december - immediately following the reunion concert at the o2 arena! and in another twist, we last caught sight of jimmy page when he and leona lewis did a duet of "whole lotta love" at the closing ceremony's of the beijing olympics last weekend! seems as if robert wouldn't sing with jimmy, he'd just find someone else to join him as well.

update: apparently, robert plant is not currently into the plans for a reunion :(

Posted by rundangerously at 12:56 PM

thanks for the update on a fantastic band. could use a "Whole Lotta Love" running up the hills in Westport on Saturday.it's too bad my "cardiac" event reinforced the need to ban ipods. but at last year's Westport 10m, someone with an ipod ran the wrong direction and could not hear the runners behind her shouting she was going the wrong way.

They don't call me ''zepkid1'' for nothing. I have seen Zeppelin in 73, and 76, all Plant solo tours, both Page Plant tours(No Quarter, and Walking into Clarksdale) and have seen the Page, Beck, Clapton shows in the 80's. I know Plant will join with Page, Jones, and Bonhan on new cd and i believe 100% there will be a world tour.LOng live Zeppelin