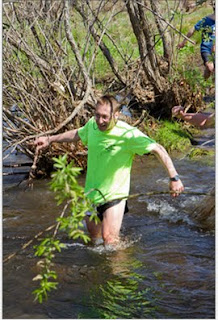 on sunday i ran the 25th edition of the leatherman's loop in ward pound ridge reservation. it was my first time running this race, an trail running event that had been on my "to do" list for years. the course features mud (lots of it), water crossings (three significant ones), and some decent climbs (a 45 degree sand dune)! the race takes it's name from the historical figure of the leatherman (who himself remains unidentified). interestingly, the historical leatherman made the news himself as reports of the upcoming exhumation of his remains were in the monday papers! but that's another story...

back to the leatherman's loop - it was actually the third of a trifecta of new york trail races that i've run this spring (which includes mudders and grunters, and the urban environmental challenge) - all were firsts for me, and all had been on my "to do" list for years. i car pooled up with emmy, and we expected to see some familiar faces there. emmy had run the loop more than a decade ago - and took home a pie for winning her age group. she'd take home another age group pie today! todd and kate, like me, were loop newbies. john was running his 19th loop - and bob was tackling his 23rd official loop (all 25, unofficially)!

in addition, "caballo blanco," of "born to run" notoriety, returned to the loop. he ran the race last year - and was back for another go at the course. after the race, kate pointed out that christopher meloni, of "law and order: svu" fame, ran the loop - together with daughter. while i didn't get to see meloni, i did meet micah true ("caballo") and his girlfriend, maria, after the race. both were extremely gracious and down to earth people. micah headed over to the westchester road runner store that night to give a running presentation.

as for the race itself - it lived up to all the hype, and then some! race director, tony godino, and his crew of staff and volunteers put on a spectacular event. from the choreographed parking ballet that easily got the half mile long of cars into the park and into spots on the grass field, to the course marshalls and post-race festivities - it all went off without a hitch. and that is saying a lot when well over a 1000 runners of all shapes, sizes, and abilities set off on the challenging cross-country trail adventure, affectionately known as the "loop."

given my trail running experience, i still managed to kick off my race with a classic rookie mistake. todd and i were together at the start - a few rows back from the starting line. when the gun went off we instantly lost sight of each other as the field moved forward. todd, intelligently - angled off to edge of the crowd and sprinted along side to the trail head. i, suffering from some variation of brain freeze, manage to get stuck in the teeming mass of runners. it was almost 3 miles later that i finally emerged with some "running room" on the trail!

be that as it may, i had a great time along the way! while my target of a sub-one hour finish was dashed (it took 1:02:33), i enjoyed every minute (and obstacle) on the trail! the mud wasn't particularly daunting, but the water crossing were a challenge. the first was more a "let's get wet" crossing. the second was easily the toughest, with the water reaching chest level. the third and final one (a/k/a the "splashdown") was, perhaps, the trickiest. it didn't seem deep - and the finish line was tantalizingly close - but there was an undercurrent. the guy in front of me lost his footing and splashed face first into the stream!

the other interesting obstacle was the roughly 45 degree climb up what some referred to as a sand dune. it was around the 4-5 mile mark and most runners took it as a terrain enforced walk break! after we crested the hill, the course flattened out and the run back to the finish was relatively bucolic - and included a pair of violin players just before the final stream crossing! as i approached the finish chute, todd was running back toward me and shouted "what took you so long?!" without getting stuck in the bottleneck at the trail head, he finished well ahead of me.

caballo blanco finished just behind me. after emmy finished, she introduced me to him. she had run with him for some of the course. we'd socialize a bit more at the post-race brunch. but for the moment, todd, emmy and headed back to the parking lot to change into dry clothes. while waiting for the results, i met up with hiro and yuki (who i hadn't seen during the race), and traded stories with some other runners. then, at the awards ceremony, emmy, john, and bob, each took home age group pies!

all in all it was a fantastic day - and the sunny weather made it even more enjoyable! put this race on you "must do" list. more importantly, put the opening day for race registration (yet to be announced for the 2012 edition) on your calendar - to avoid getting closed out. i'm definitely going back for another turn at the "loop" :D

here are my race photos. the above photo, of me traversing the "splashdown," is courtesy of dawn moore.

check out the new york running show (episode #28) for our discussion of the leatherman :D

Posted by rundangerously at 3:47 PM

That is INTENSE! I'm not sure if I could handle it.