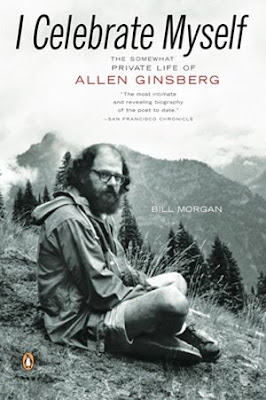 allen ginsberg, a dharma lion, died 12 years ago today, april 5, 1997. he was 70 years old. his powerful influence on american poetry and letters - well beyond his role as a poet of the beat generation - can't be overstated. beyond his poems, ginsberg influenced the development of free speech and expression when "howl" was put on trial and held not to be obscene. he was a world traveller, a convert to buddhism, a photographer, and even found time to become an "actor" and then a "musician," during the course of his life.

while i've posted about the beats, his photographs, and the "howl" trial, i've never posted on his connection to music. it was, perhaps, a logical stepping stone from his many readings and appearances. for example, his relationship to bob dylan - and the effect they had on each other - is truly amazing. they first met in 1963 and remained friends until allen's death. dylan and ginsberg even "recorded together" (i use those terms loosely) in 1971 and, again, in 1982. ginsberg was a member of dylan's famed (or infamous) 1975-6 rolling thunder revue - and appeared in dylan's film, "renaldo and clara."

while not "musical" in nature, this clip of allen and dylan at jack kerouac's grave is a favorite of mine:

ginsberg went on to record, with paul mccartney, the incredible "ballad of the skeletons" (clip below), he also recorded albums with phillip glass ("hydrogen jukebox") and the kronos quartet (reading "howl"). a far cry from the image typically associated with a beat poet!

back to poetry, which i'd like to end this post with, here is one ginsberg wrote about dylan:

Those "chains of flashing images" that came to you at night
were highest farm boy's day dreams
that glimpse the Angels light.

It wasn't dope that gave you truth
nor money that you stole-- was God himself that entered in
shining your heavenly soul.

Posted by rundangerously at 9:38 AM

Here's to Allen, one of the greats, timeless a master of invention in language, he's missed, cheers Allen