bob dylan's "together through life" 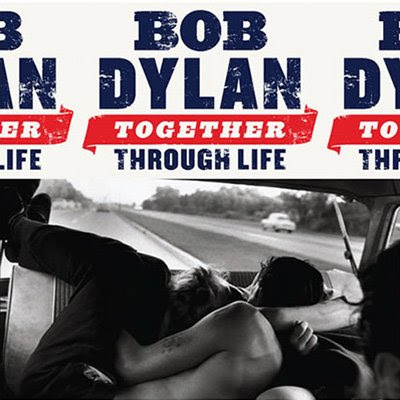 i picked up dylan's newest studio album. "together through life," this morning. with robert hunter (erstwhile grateful dead lyricist) co-writing nine of the ten songs, and featuring david hidalgo of los lobos on the accordion and mike campbell of tom petty & the heartbreakers on guitar and mandolin, the ten song set is quite a collaborative effort on dylan's part.

"together though life" had it's origins in the composition of the song, "life is hard," which dylan wrote for french director oliver dahan's upcoming new film. that french film, ironically, is about a road trip from kansas to new orleans. "this dream of you" is the only song on the album dylan wrote without hunter.

while i wanted to hear dylan's first new material since 2006's, "modern times," i was even more interested in his collaboration with hunter on the lyrics. they hadn't written together since the late 80's. one of those early songs, silvio, is occassionally covered by bob weir and ratdog. some of the new material on "together through life" is definitely "cover-worthy."

it's strange to juxtapose a "fresh" clean sound, with the soon to be 68 year old dylan. the stark, weathered - even ravaged - vocals we've come to expect from him glue together the string of "love gone wrong/not as planned" songs. a working subtitle to this album could easily have been joe jackson's ironic little chestnut, "fools in love."

dylan starts off with "beyond here lies nothin'" - in which he sings "just as long as you stay with me/ the whole world is my throne." but in the context of an exhausted, world-weary voice - the refrain at the end of each verse telegraphs an increasing beat, shrinking down-sized world to rest that throne upon. he isn't taking us on an upbeat stretch of love songs.

the plaintive lament of "life is hard" with lyrics like: "i walk the boulevard/ admitting life is hard/ without you near me" followed by "my wife's home town" and these lines: "she can make things bad/ she can make things worse/ she's got stuff more potent than a gypsy curse." make you wonder if her home town ain't hell on earth ;D we're treated to the dark side of love, relationships, and the human condition.

interestingly, while there is a certain creaky jaundice - an underlying weariness from the "i've been there before" - it doesn't come off as angry or spiteful. dylan paints some bleak - and to some, nightmarish - landscapes. but they're vivid pictures, and sometimes spiral down into the gutter, revealing the untrustworthiness and bitterness that plays out when things break down. to quote the title of the closing track, "it's all good."

while the preoccupation of the ten songs is all love and its attendant problems, the variety of music ranges from old fashion blues, bitter ballads, country, zydeco and, yes, even to rock. it's all good.

Posted by rundangerously at 10:01 AM