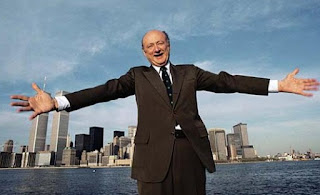 edward i. koch, the iconic mayor of new york city from 1978-1989 died from congestive heart disease this morning - he was 88 years old.  i became a big fan of mayor koch during my days as a student at pace university from 1980-84, which is directly across from city hall.  mayor koch was in every respect a larger than life personality - and did a tremendous job to  bring nyc back from the brink of bankruptcy in the late 1970s and into a significant growth cycle during the 1980s.  he was an outspoken, often polarizing character.  you either liked him or hated him, there was rarely a middle ground.

on the running front, koch almost single-handedly forced fred lebow to open the nyc marathon to handicapped participants.  lebow was originally against wheel-chair participants.  but he eventually (from a combination of litigation and political pressure) brought them into the race.  koch was also instrumental in getting lebow (the nyrr) to contribute some funds to subsidize the city's costs associated with staging the marathon.

koch was a pretty busy private citizen after he left the mayor's office.  he practiced law, had a radio show, wrote op-ed columns, books (both fiction and non-fiction), appeared in movies (as himself) and, over the last few years, wrote movie reviews!  he was constantly in motion - and, it seemed, always smiling.

rest in peace mayor koch!
Posted by rundangerously at 3:40 PM