"beat memories: the photographs of allen ginsberg" exhibit at the grey art gallery 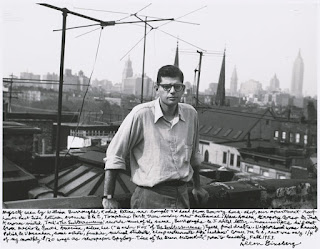 the only downside to my visit yesterday to nyu's grey art gallery on washington square park to see the ginsberg photographs was the bone-chilling half dozen block walk there from the astor place train station!  and, also weather-related, the museum staff had taken down some photos because of the condensation that permeated the walls that held the photos (which faced the glass facade of the museum).  otherwise, the exhibit itself, "beat memories: the photographs of allen ginsberg," was outstanding.

about five years ago i went to see an earlier, smaller version, of this exhibit (then entitled "beat and beyond") at the suny new paltz samuel dorsky musuem.  many of the same photos were prominently featured - the william burroughs at the met (brother sphinx) was the cover shot for that exhibit.  a couple of years afterwards, many of those photos became the core of this expanded exhibit when it premiered at the national gallery of art in washington, d.c., in 2010.

for any fan of the beat generation, these photos are a must see.  some of the more iconic photos have been seen many times before in various guises.  most are typically found in the photo gallery of beat biographies.  some even emerged as the book covers themselves (kerouac w/his brakeman's manual was the original cover of "jack's book" and a bearded ginsbeg in india became the cover of "a blue hand: the beats in india" - interestingly, both photos were colorized for those book covers).  but seeing the images as the photos they were - and many of them enlarged for the show - is simply a wonderful sensual pleasure.

another interesting aspect of the exhibit is getting to see the physical evolution across time.  one example: the portrait photo of a serious sober gregory corso is a stark contrast to the romping imagines of corso in france during the 1950s.  but, even back then, one image of corso in the garret of the beat hotel clearly foreshadow the skin that he would grow into.  another photo, and for me my least favorite photo of the entire beat generation (and that says a lot) is of a middle-aged kerouac sitting in ginbserg's east village apartment in 1964.  he looks utterly spent and defeated, almost in agony - a victim of his slow suicide by alcohol.  kerouac would be dead five years later.

in addition to photos, there were plenty of beat artifacts - mostly snippets of writing (poems, letters, notes, doodles).  but there were also some first editions - including (obviously), "howl." "on the road." and "naked lunch").  all this good stuff is crammed into four glass exhibit boxes spread across the exhibit space,  it's a fun little detour from the photos that line the walls.

the exhibit runs until april 6h - plenty of time to get there when the temperature inches up a few degrees!  but get there you must if you're a fan of ginsberg and the beats :D 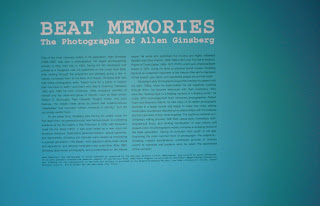 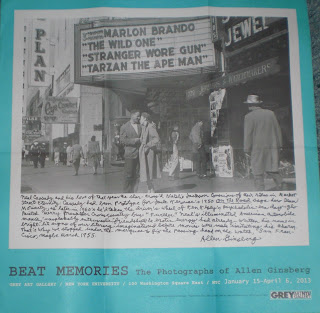 Posted by rundangerously at 8:30 PM