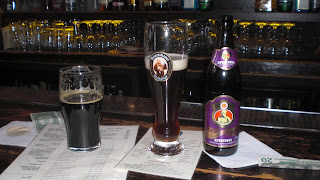 yesterday todd and i checked out puck fair, on lafayette, just south of houston street. as a bonus, it's conveniently located just 4 blocks west of the whole foods beer store :D  puck fair is the most recent in a string of bars that feature a decent selection of craft beer that we've visited (said list includes, mudville 9, the ginger man, the waterfront ale house, the pony bar, the blind tiger ale house... to mention a few).

i started with an aventinus, a dark german wheat beer.  actually, it's even a darker version of the traditional dunkel weiss style - a doppelbock.  it's one of my favorite beers.  if that had a high abv (8+), the brooklyn black chocolate stout was off the chart with a 10% abv!  the chocolate stout had some great flavors, but i couldn't get past the high alcohol content.

afterwards, todd took the opportunity to check out the whole food beer store :D
Posted by rundangerously at 12:39 PM