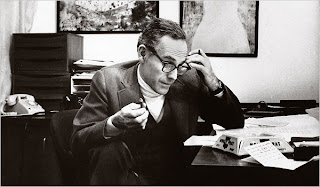 barney rosset, the publisher of grove press and evergreen review, died tuesday night at the age of 89. rosset, through his publications and actions, was at the forefront of the fight against censorship during the 1950's and 1960's. by way of a single example, rosset was instrumental in bringing henry miller's work to the american public. it was grove press that first published "tropic of cancer" in the united states, and then underwrote the legal fees incurred throughout the country to defend it against charges of obscenity - and culminated in a landmark legal victory in the supreme court.

rosset was the subject of a 2008 documentary, "obscene," - which did a fantastic job of capturing not only the man and his crusading zeal to push the limits of the first amendment, but also the people and institutions that sprung up around him.  in addition to "tropic of cancer," rosset and grove press led the fight to publish such diverse titles as "lady chatterley's lover" and "naked lunch."  evergreen review was instrumental in bringing the beats to print.  rosset not only republished "howl" in the pages of evergreen review - but the landmark ruling that held the poem was not obscene.

this man led a truly remarkable life - and a good portion of it was spend expanding the borders of our first amendment rights.

here is his obituary in the new york times.
Posted by rundangerously at 9:37 PM