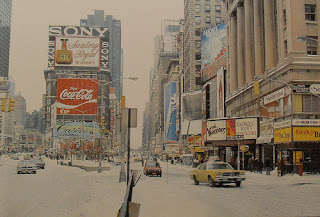 saturday's snowstorm - the first of the season - turned the manhattan half marathon into a fun run and resulted in a postponement of the boston build-up 15k until next weekend.    given that we had more than 30 inches of snow by this point last winter, i've got no complaints about the weather - especially when we had only a few inches of snow when it was all said and done  (and we got a qualifying credit for the manhattan half).

but from a mileage perspective, it was tough to make up the 13 miles on saturday.  i only managed nine - broken into two 4.5 mile runs.  the first was during the storm itself, and running through 2-3 inches of freshly fallen snow was fun.  the second 4.5, after the snow had stopped, wasn't much fun because now there was 4+ inches on the ground and forward motion across it was work!  add to it shoveling snow - twice - and i got some solid cross training in yesterday :D

this morning i got in 6.5 miles - on the same route, but with the snow cleared.  that was a totally different experience.  it was just as cold (maybe colder), but the effort was noticeable easier.  i'll head back out for a second run later this afternoon for another 6.5 - which should give me 22 training miles for the weekend - instead of the 22.4 race miles.  while it wasn't what i'd planned - it's all good :D

then it's time to sit back an watch the giants play san francisco :O
Posted by rundangerously at 1:50 PM

the second 4.5, after the snow has stopped, wasn't much fun because now their was 4+ inches on the ground and forward motion across it was work!

Sounds great to me. Running in a few inches of snow is like running on the beach. Sure you have to work harder. But when the world around you looks like a postcard it is well worth it.