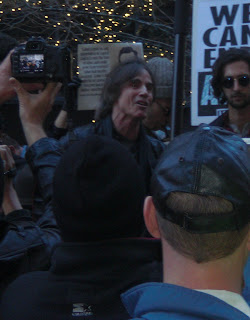 yesterday, when i got to the office i heard on cbs radio that jackson browne would be a zuccotti park that afternoon to play a few songs. the first thought that came to mind was "did zuccotti suddenly get re-occupied?"  no, but it did sound interesting.  while i couldn't make it down there - nor would i have wanted to deal with the crowds - crosby and nash played a couple of tunes there in early november.

since zuccotti park is just 4 blocks south of my office, i went and checked it out at lunch time.  it was a very small scene.  browne, and the members of "third eye blind," were stationed in mid-park, with roughly a hundred or so people circled around them.  there was no amplification - just their acoustic guitars and voices.  that made listening to the music, for anyone outside the immediate circle, practically impossible.  the din of everyday nyc bustle drowned out the sound.

i inched my way close enough to catch snippets of songs - and some of the obligatory social commentary.  but, given the impossible listening conditions, i only stuck around for 3 songs before i went back to the office.  while it was certainly a nice gesture, the "jam" wasn't a worthwhile experience - if you were intent on actually trying to listen to jackson browne, or third eye blind.  but it was a great excuse for a midday walk :D 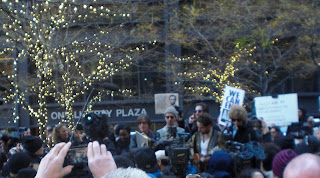 Posted by rundangerously at 7:19 AM

I had breakfast there that morning. I did not see the point in sticking around