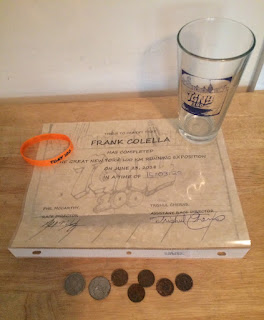 Quick update of the 2018 edition of the Great New York Running Exposition 100 ("GNY 100") while I write up a race report over the next couple of days.
Here is my race report :D
Here are my race photos and the official race results.

Finished the 100K (which according to my GPS was actually 63.5 miles, thanks to a couple of missed direction markers), in just over 15 hours (15:03:20 official)!  I had reached the 51 mile aid station in exactly 12 hours (had a slice and a half of pizza - my first real food of the day!) before pushing on to the finish.  It took just under 3 hours to cover the last 11 miles (but that was a little misleading because I ran to the 56 mile aid station in just over an hour and spent roughly 2 hours covering the last 6 miles).  I was ecstatic - and celebrated with cold beer and a bit more pizza!

I had planned on running the entire 100 miles, but beaten up condition aside when I arrived at 100k, I didn't want to repeat the mistakes of 2016 when I ran 100 miles at GNY and then had to dnf at 60 miles at the Vermont 100 the following month.  Hopefully the fewer miles this weekend will give me more recovery opportunity for the Vermont 100 next month :D

Either way, it was a great time yesterday (pun intended) - and we experienced something of a miracle when NO rain showed up.  Thankfully the weather forecasts were way, way off!

This was Jill, Emmy, and me at the finish line last night - that can in the chair's drink holder is a Mexican Tecate Beer (and don't tell anyone, but I also had a small bottle of Corona as well) :D 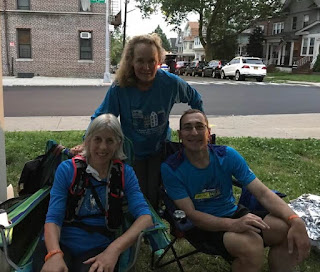 Posted by rundangerously at 11:45 AM