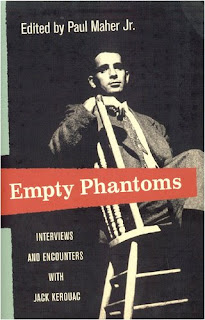 i followed up the "original scroll" version of "on the road" with "empty phantoms: interviews and encounters with jack kerouac" - also edited by paul maher, jr. (the fourth book on kerouac of his that i've read - a record of sorts). if maher's "american journey" was a prequel of sorts (the raw material of his road stories), and the "original scroll" the unadulterated masterpiece, then "empty phantoms" completes the trilogy as the tragic sequel to kerouac's post-road life. it served to highlight the love-hate relationship i have with kerouac and his incredible body of work. via the interviews and reporting one can literally see kerouac travel down the horrible road of suicide by alcoholism. and it aint pretty.

"empty phantoms" isn't for the casual kerouac fan. it's a collection of material (almost all post-"on the road") that reports on kerouac (both his work and (many) escapades). the material can be found elsewhere and most will be familiar to kerouac fans. the transcript of his appearance on william f. buckley's "firing line" is there, his "reading" with steve allen is there, and the "famous" interview with "paris review" is included. some other fascinating material includes the translated (from the french) appearance kerouac made on the radio canada program - and, almost as an afterthought, the military/medical records from kerouac's incredibly short 1943 stay the navy's basic training program.

but the material i enjoyed the most came from two long excerpts of john cellon holmes' work ("gone in october: last reflections on jack kerouac") - he was a very close friend of kerouac's since their days together as struggling writers in the late 1940's, the "pertinax" columns in the lowell sun written by his future sister-in-law, mary sampas, that detailed kerouac's triumphic return to lowell (and the non-stop parties that ensued), and al aronowitz's great article (well-researched and annotated by kerouac himself), "st. jack," published in the new york post. this material all came from people who knew jack the man, not the cardboard cut-out beatnick the media had morphed him into.

the lowest point is the (or i should say, the meanest, snarkiest, obnoxious) interview with ben hect which literally drips with his condescension at the notion that he should stoop so low as to interview the "king of the beat" - a title used pejoratively in this context (and one which kerouac despised). i will admit to having listened to this interview a few times - and it comes off even worse (if that is possible) when heard rather than read. there are a few snarky pieces, but the rest of the interview and newspaper pieces are middle of the road.

the sad part of this stuff - the mental and physical deterioration of jack kerouac from alcoholism. his answers to mid-60's interviews become increasingly outlandish, borderline incoherent, and vulgar. yet at the same time, he seems to be fully conscious of the downward spiral he's caught in - and unable (or unwilling) to pull himself out of. it's like watching the train wreck unfold before you - and it's impossible to avert your eyes to the approaching disaster.

it's a very tough (in the sad and depressing sense) book for kerouac fans. "empty phantoms" is an important collection of material that captures the world kerouac lived and died in. for kerouac scholars, it's a must read.

Posted by rundangerously at 8:48 PM