jack kerouac "on the road: the original scoll" book review 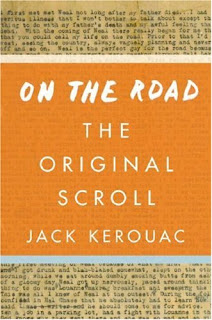 i finally had a chance to sit down and read jack kerouac's "on the road" in its original unadulterated form ("on the road: the original scroll"). the fiftieth anniverary edition (2007) sat on the bookshelf for well over a year. in the meantime i read "jack kerouac's american journey: the real life odyssey of 'on the road'" as a refresher on the actual road trips. it was worth the wait because the original scroll version equalled the novel it was "fictionalized" into. i would never suggest that anyone should bypass "on the road" in favor of the scroll, but i will say that for any serious fan of kerouac, the scroll is an essential supplement to the novel.

the legend that kerouac knocked off the book in a three week benzedrine fueled marathon eating and sleeping in front of his typewriter - is just that, a myth. kerouac did spend three straight weeks in april, 1952, typing the manuscript that is now affectionately referred to, with almost biblical reverence, as the "scroll." the "scroll" was actually a series of taped together sheets of paper - and, without diminishing the myth, was retyped into a conventional manuscript by kerouac himself after he dramatically unrolled it for the effect it had on his shocked agent.

but it was not a spontaneous outpouring of prose. keroauc spent the time assembling (on a high of constant cups of coffee) the thousands of words and pre-written scenes that populated his work notebooks and looseleaf treatments into one continuous non-ficition retelling of the road trips he took with neal cassidy in the years from 1947 until 1950. in one sense, when truman capote tossed off what he thought was the ultimate insult to keroauc, "you don't write, you type write," he was correct. kerouac had already written on the road - and the assembly and transcription became the myth of spontaneous prose!

while the sheer physicality of the scroll is impressive, the actual text kerouac typed out stands on its on. i was lucky enough to see the scroll when it was exhibited at the new york public library last year - an imposing relic of the myth (and well worth going to see if the exhibit goes back on the road - can't help that one). but reading the narrative with the original names, original places, unadorned by the subsequently grafted literary flourishes (shame on you jack - "first thought, best thought") is a jarring juxtaposition.

on one level the differences between the scroll and novel are practically insignificant (pseudonyms and altered place names). yet as a behind the scene glimpse at the emergence of a mature kerouac voice - light years beyond the gray flannel writer of "the town and city" - it's a priceless document of the writer developing his craft. to venture off on a beatific synoptic tangent, it's almost as startling as reading the gospel of mark - and then witnessing the retelling via the gospels of matthew and luke. the same narrative, but unique perspectives.

too bad there isn't a proto-"huck finn" to compare with final version of twain's masterpiece. with "on the road," the transformation from autobiography to autobiographical fiction is more than a change in names and places. the scroll contains kerouac's direct alterations, insertions and cuts to transition from the narrative to a fictionalized account. then there are his pure "literary embellishments." the most jarring, to create the literary road novel is this little pretension: "what did they call such young people in goethe's germany?"

reading the scroll, which itself wasn't kerouac's first draft - but the sum of various starts and stops with different versions of the narrative that he finally assembled in that one document is an eye-opening experience. the booked also included four essays to introduce the road trips and development of the scroll. i read the essays after i finished the scroll because i didn't want them to influence my first take on the material.

don't pass up the chance to read the undiluted version of "on the road." 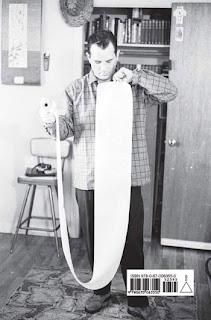 next up on my beat reading list: "empty phantoms: interviews and encounters with jack kerouac," paul maher, jr., editor.

Posted by rundangerously at 6:02 AM

funny to come across your blog today. I bought that book and the 50th anniversary book at the same time, when they came out as well. And I too did not pick it up until just recently. I am about half way through the scroll right now. Your points are all the same ones I would make. Love seeing the real names and the unadorned editing. Highly recommended for any Kerouac/Cassady/Ginsberg/beat fans.

Thank you very much for this review. I nearly bought The Scroll on a recent trip to Barnes & Noble, but opted for Visions of Cody instead. I will get around to the scroll someday.

You might be interested to know that I read a paperback copy of On The Road some 30 years ago, while in college. It was a cheap 50¢ paperback that my dad had handed down to me.

About 10 years ago, I tried to re-read it, and the ink or paper (or both) used in the paperback were of such poor quality that entire pages had gone blank. It had not even been left in the sun or any such thing - very mysterious!