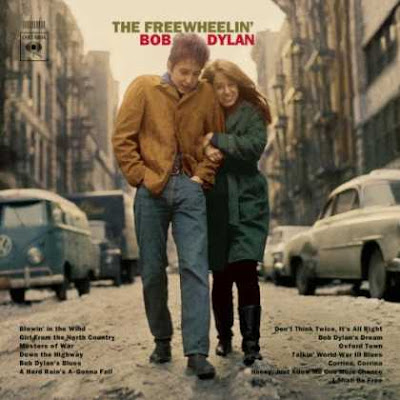 "the freewheelin' bob dylan" was released on may 27, 1963 - 46 years ago today. it was dylan's second album, following the release of his self-titled debut album a year earlier. except for two covers, all the material was written by dylan himself. it was a sharp contrast with the first album, where all but two songs were covers.

"freewheelin' bob dylan" includes the iconic masterpiece, "blowin' in the wind" - probably one of dylan's most famous songs. the album also includes the classic "a hard rain's a-gonna fall" and "masters of war" (a song which is tied with "joey" as my all-time favorite dylan tunes). aside from dylan's version of "masters of war," i love bob weir's cover of it with ratdog (and eddie veder's take on it as well)!

the cover art is also iconic, with dylan on the streets of greenwich village with his then girlfriend, suze rotolo (it was actually taken just in front of the apartment they were currently living in). the backstory to the photo shoot is told in rotolo's recent biography/memoir, "a freewheelin' time: a memoir of greenwich village in the sixties."

so take the time to listen to some bob dylan today :D

Posted by rundangerously at 10:09 AM