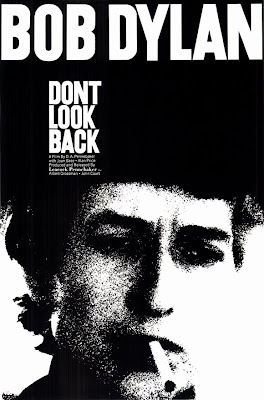 dylan's "don't look back" premiered in san francisco on may 17, 1967 - and opened in new york 4 months later, in september. a digitally remastered version was released in november, 2007, in a 2 dvd edition. the second dvd included pennebaker's documentary, "65 revisited," about the documentary (which was also released that month). "don't look back" ostensibly documents dylan's 1965 british tour - and is a must see for any fan of dylan.

there's a great cameo of allen ginsberg on extreme screen left as dylan runs thru his cue cards for subterranean homesick blues. the film itself extensively documents various interactions that occurred during the unfolding tour. aside from the music performances, there are the acerbic press availabilities, the goofing around in hotel rooms, and the money negotiations by grossman, his manager (as well as the interference he runs for dylan). the film undoubtedly (but perhaps unintentionally) chronicled the end of his relationship with joan baez.

while "don't look back" currently holds a remarkable 100% freshness rating at the "rotten tomatoes" site, it had it's detractors at the time. but even 40+ years later, the film - and the revelations it made about dylan (and his style, to put it awkwardly) still resonate. check out this 1998 look back at the film (occasioned by the newly restored print) by probably my all-time favorite film critic, roger ebert, where he revisits his initial take to see how it held up.

i've enjoyed the film each of the handful of times i watched it - as well as the behind the scenes "65 revisited." it's essential dylan - don't pass it up :D

Posted by rundangerously at 8:04 AM

The demolition of Donovan with a peerless Baby Blue is always a joy to behold and one of rock's greatest put downs IMHO.