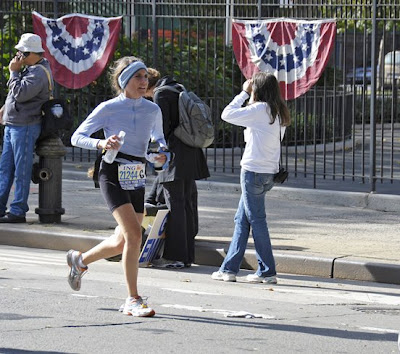 i'm so happy to post susan's nyc marathon report! this may be here first nyc marathon, but she is definitely an accomplished distance runner. we first met at the long island greenbelt trail 50k last spring. she's run a number of ultras since then, and i last saw her at the staten island 6 hour run in september.

Many thanks to Frank for allowing me to post my first ever race report about my first ever NYC marathon! Be forewarned, however, that it’s not a tale full of speed and glory like the ones usually provided by Frank and his friends!! It was a wonderful experience for me, though, and I appreciate the opportunity to re-live it here....

I tried to sleep well the night before the race, but was jolted awake at 2:30am by a good luck text message from my friend Pam. (Her kids are too young to drive, so she hasn't adopted the sleep-with-the-cell phone-under-your-pillow habit yet) After I calmed myself down, sleep was sporadic, but I was ready when the real alarm rang. Glen drove me and my grossly over packed drop bag (I could have moved into an apt after the race with all the stuff I brought) to the Meadowlands where I waited on line for a porta-john (the theme of the morning), and boarded a nice, warm and comfy bus. I brought a small, mindless knitting project-a hat for my Pilates teacher- to occupy my hands and calm my nerves before the race, and I worked quietly on it for the entire ride.

We arrived at Ft. Wadsworth at 7:30, and I was struck dumb by the scope of what was happening. So many people, so many UPS trucks for bags, so many volunteers, so many different languages, so much food, security, and so many porta-johns! I was happy. I found a place to sit and pulled out my hat to work on. This offered much amusement to my fellow runners--many of them, especially non-Americans, thought it was hysterical, and they pointed and laughed as they made comments I couldn't translate.. One cold guy requested a pair of gloves, and two people even took pictures, so I figure I'm on some French runner's blog knitting on my hat in Ft. Wadsworth... ...oo la la!

Soon it was time to eat my traditional bagel and peanut butter marathon breakfast. I didn't feel remotely hungry, but forced it down anyway, thinking it was just the usual pre-race jitters. Unfortunately, the nausea that started then, didn't really let up the whole day. I walked around and jogged a bit, trying to settle myself down, but ended up belching my way to the corrals. I found a spot at the very front of the wave, right next to a porta-john, which made me feel safe, until we walked onto the bridge. It was cold and windy, but I felt ready to go when the gun went off.

The first mile up the bridge seemed long and windy, but the view and the realization of what was happening was quite moving. I settled into a comfortable rhythm by the 2nd or third mile, and held steady at a sub 3:40 pace until mile 16. I loved all the bands in Brooklyn, and the spectators, but was too distracted by them and too gastrically uncomfortable to drink anything until mile 10. At that point, I discovered that my fuel belt was on upside down, and that unzipping it would dump everything out onto the blue line. I fumbled about for a while, fixed it, and finally took my first fluid from my hand held at the half-marathon mark. Dumb, I know....

It worked, though, and I felt a bit better, esp since it stayed down, and I was brave enough to continue to sip every now and then. But by mile 16, on the Queensboro Bridge, I was feeling queasy again and slowed to a 3:40 pace. The miles from 16-19 were difficult and felt slow to me. First Avenue, after the initial breathtaking entrance, was looooong, windy and uphill. With a mixture of desperation and trepidation, I ate two shot blocks and kept on going. The Bronx, though, was really fun –even though those miles were the slowest of the day, I felt good, and from mile 20 on, I had a great (but not really speedy) time.

Three of my kids live together on 138th in Harlem, and they were there with Glen and his ubiquitous camera. I was so happy to see them looking all tall and bundled up and handsome and loud...I was such a proud and happy mom at that moment, and thinking about them kept me smiling all the way into the park. I started to pick up the pace from mile 23 until the end, which made me happy, as mile 23 had been my Waterloo in each of my previous marathons. Central Park was nothing but fun, and even though the Finish Line looked more business-like than festive (what, no balloons?) I was happy to see it and happy with my second best marathon time of 3:45.

The zombie death march to the baggage truck wasn't too bad-the most striking thing was how quiet it was; after a whole day of screaming, the only sounds were the officials making announcements and foil-clad runners talking quietly to each other or on their cell phones.
By the time I got to my truck, though, I was too cold and damp to wear my running clothes for even a minute longer. I asked a volunteer to hold the sheet around me and stripped down in the middle of Central Park, with thousands of people all around. (a first for me, but probably not an uncommon occurrence!) I then held an Italian guy's sheet for him, so he could change too. (hooray for international clandestine nudity!)

I met up with Glen, who had ridden his bike all over the city and gotten pix at three locations, then we headed up to Harlem, where we hung out with the kids for awhile. Getting home across the GWB was no picnic, but we made it, after which I had a glass of wine and did the race post-mortem while finishing the hat I'd been working on all morning. After 6 marathons, I need work on strategy and tactics...also I must figure out how to remember to eat and drink. I feel mentally stronger, though, and was happy that my nausea hadn't incapacitated me, that mile 23 was vanquished, and that I hadn't walked a single step. Now...I just need to do all that--FASTER!!!!

But, honestly, I couldn't have asked for a better day...hung out with my kids and Glen, had a beautiful long run with a lot of good company, and made a hat... It doesn't get any better!!!

Posted by rundangerously at 6:02 AM

Susan - awesome rr. Made me feel like I was running beside you. For me (and I'm not one of Frank's speed demon friends) the faster I got the greater the gastric upset. So, set realistic goals. I also find hydrating with 100% Gatorade helps calm the stomach at race pace. Good luck with all your events.

Susan -Wonderful race report!! The part about the hat is too funny (no wonder you have such a slender teenage figure at age 52 -you run and do Pilates:)))--the multi-tasking (glad you finished the hat); the French man taking a photo, getting changed next to an Italian man ---that is one fun thing about the race-the international flavor. (I asked a German woman to take my photo after the race and she didn't speak English so couldn't understand how the camera worked)Didn't realize this was your 6th marathon. So even though you are 'new' to distance running, you are already a pro. You have the talent to run faster and longer so have lots of goals to achieve.
Glad that your stomach felt better -nausea something we all deal with, and it's tough to run when feel sick...glad you saw Glen and your kids enroute --great fun!! See you at JFK!! Will you have a new hat to knit in car going down?

Pam...thanks for the advice and kind words. I'll try full strength Gatorade on my next long run and see what it does for me.
Emmy...Thanks! I loved the international flavor, too--a huge party...I don't really "do" Pilates--I creak through a class once a week. I love the instructor, though--she's amazing-- I will definitely have something on the needles in the car on the way to Maryland...I never travel without it.
See you soon!
Frank--Thanks again for letting me guest!!