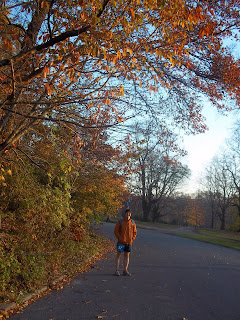 i've run a lot of races in propect park, but heading back there to run a marathon was an entirely new experience.  the opportunity to run 26.2 miles in brooklyn - my hometown - had me looking forward to the inaugural brooklyn marathon since the race was officially announced last summer.  normally i'm not very enthusiastic about multiple loop courses, but under the circumstances i enjoyed every trip around the park as i closed in on the finish line!

we were blessed with some fantastic weather, more like late september than late november temperatures.  and, as a bonus, there was plenty of fall foliage still on the trees.  my only time goal was a sub-4 hour finish.  given that part of the course included 6 climbs of the notorious north hills, a four hour finish wasn't a foregone conclusion.  not only did i run a sub-4, but my 3:54:26 was actually a minute faster than my finish at the nyc marathon 2 weeks earlier!  but i've gotten ahead of myself.

three days earlier, on thursday night, the packet pick-up at the gibson, a williamburg local bar, was like a pre-race party.  adding to the atmosphere, aside from the brooklyn and six point beer, was the locale: beford avenue - right on the nyc marathon course!  what ambiance - what an auspicious lead up to the race.  at the gibson i had a couple of beers (or 3) with eliot - and our only real concern was the sunday morning commute down to prospect park from westchester.

as it turned out, i wound up driving in with emmy (who only decided to run the race late saturday afternoon, after she had completed the knickerbocker 60k!).  as luck had it, not only wasn't there much traffic on the ride in, but we got street parking right alongside the park - it doesn't get any easier than that!  most of the pre-race activity was on center drive, the start and finish location of the race.  it was as low-key a race start as i've participated in (at any distance).

in addition to the people i had expected to see, eliot, steve, and michael - i was pleasantly surprised to see ari and amy (fellow ny running show participants), cherie (volunteering at one of the water stops) and wayne (running the race),  chris (who had just run a 2:39 at chicago!) and his wife bea (both running the race) and mat (who had also run the knickerbocker on saturday and would line up for the marathon) - to mention just a few.  and, to help the pre-start time fly by, i was interviewed on ny1 as part of their race coverage!

as for the race itself - after a few brief remarks from two members of the city council and final course instructions from michael - steve got the approximately 300 runners officially underway around 9:15 or so.  the course consisted of 3 lower loops of the park together with 6 full loops of the park.  the most notable terrain feature was the climb at the north end of the park, which we would complete 6 times!  to help keep tabs on the number of loops completed, runners could use 9 rubber bands (discarding one with each completed loop).

to hit my sub-4 hour target, i needed to run all 3 lower loops in one hour, and do 2 full loops per hour.  while i started with the 9 rubber bands on my wrist, the mile markers were so helpful that i found myself counting miles instead of loops.  my goal morphed into running sub 9 minute miles (instead of counting loops).  as it turned out, i averaged an 8:57 pace (slowing with each climb and picking it up on the downhill).   i was incredibly pleased that i didn't have to walk the hill once during the day :D

at the half i was concerned enough to reassess my pace.  i'm a believer that 2x your half split + 10 minutes is a decent indicator for a projected finish time.  if i didn't stay focused (or pick it up a little) i'd miss the 4 hour target.  as luck had it, i managed to keep it together - slowing down just about 5 minutes for the second half :D

afterwards, i celebrated with a handful of chocolate donuts - and pizza for dinner when i got home.  that night a bunch of us (steve, emmy, ari, amy) regrouped and talked about our experiences at the brooklyn marathon on the ny running show (episode #55).

here are my race photos.
Posted by rundangerously at 12:49 PM