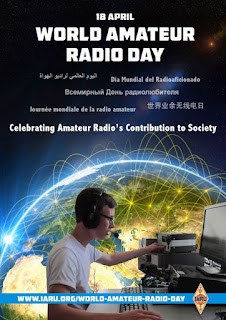 New for this year - from my end of the radio spectrum - is a brand new call sign - NI4A (from my previous KC2RVY).  I had wanted a vanity call for years, but since my license was up for renewal last year I finally did the paperwork.

Here is the official statement from the International Amateur Radio Union (IARU) on its 93rd anniversary:


Every April 18, radio amateurs worldwide take to the airwaves in celebration of World Amateur Radio Day. It was on this day in 1925 that the International Amateur Radio Union was formed in Paris. Amateur Radio experimenters were the first to discover that the short wave spectrum — far from being a wasteland — could support worldwide propagation. In the rush to use these shorter wavelengths, Amateur Radio was “in grave danger of being pushed aside,” the IARU’s history has noted. Amateur Radio pioneers met in Paris in 1925 and created the IARU to support Amateur Radio worldwide. Just two years later, at the International Radiotelegraph Conference, Amateur Radio gained the allocations still recognized today — 160, 80, 40, 20, and 10 meters. Since its founding, the IARU has worked tirelessly to defend and expand the frequency allocations for Amateur Radio. Thanks to the support of enlightened administrations in every part of the globe, radio amateurs are now able to experiment and communicate in frequency bands strategically located throughout the radio spectrum. From the 25 countries that formed the IARU in 1925, the IARU has grown to include 160 member-societies in three regions. IARU Region 1 includes Europe, Africa, the Middle East, and Northern Asia. Region 2 covers the Americas, and Region 3 is comprised of Australia, New Zealand, the Pacific island nations, and most of Asia. The International Telecommunication Union (ITU) has recognized the IARU as representing the interests of Amateur Radio. Today, Amateur Radio is more popular than ever, with more than 3,000,000 licensed operators! World Amateur Radio Day is the day when IARU Member-Societies can show our capabilities to the public and enjoy global friendship with other Amateurs worldwide

So to all my ham friends out there - get on the air today!
Posted by rundangerously at 7:14 AM