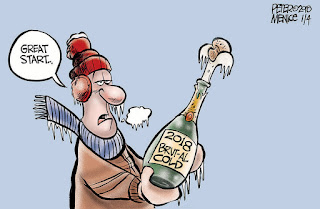 Before last week I had never heard the term "bomb cyclone" - and suspect it was newly minted to describe the seemingly never ending deep freeze that's settled in - and won't leave!  As I write that (Monday morning), the temperature has just inched above 20 degrees.  It's been a long time since the thermometer has gotten that high.

Last week the brutal cold led to the cancellation of most local road races.  The NYRR kicked it off on Thursday night with the cancellation the Kleinerman 10K (Saturday).  The next day the Boston Buildup 10K (Sunday) was postponed until next weekend.  The same day (Friday) the MHRRC announced its cancellation of the "Recover from the Holidays" FA 50K (Saturday).  And, to complete the picture, on Saturday NYCRUNS cancelled the Hot Cocoa 5 Miler (Sunday).  Intended or not, the bomb cyclone wiped out 4 races this chilly weekend!

As for just plain running mileage - I managed to log a solid 50 miles for the first week of 2018 - in those ridiculously frigid conditions.  I hate to admit it, but by yesterday a run in 7 degrees was old news.  It was almost "easy" relative to the previous string single digit runs - because the wind had died down enough that the "real feel" was actually 7 degrees, instead of the sub-zero wind chills of all the previous miles!

In any event, I'm so over winter right now!  Hopefully the days of double digit temperature aren't too far off - haha!
Posted by rundangerously at 10:44 AM