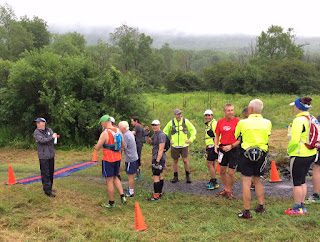 This year, I almost didn't line up for the Escarpment Trail Run.  When I went to bed Saturday night, it was raining.  When I woke up Sunday morning, it was still raining.  Somehow I dragged myself out of bed with the lame rationalization that either it would stop (somehow it continued to rain all day long) or I had nothing else to do if I stayed home (true).  As if to lull me into a false sense of complacency, it mostly stopped raining/drizzled on the drive up the race.

Like last year, I was once again assigned to the last wave (18) - set to go off at 10:25 AM.  The late start was the only saving grace because I got to sleep a little bit longer - haha.  As it turned out, our wave went off at 10:15 (with the combined 15/16 wave) because of no shows.  Last year we went off a wave sooner, also because of no-shows.  But last year it was dry!  This time around all I thought about was the looming mud slides down from Windham and Blackhead!

Once the gun set us off, we had the climb up to Windham peak.  Although it started raining at that point, the canopy helped keep it from becoming too much of a hassle.  I was 2 minutes behind my pace last year (59 v. 57 minutes).  But I hadn't gotten my head into to race yet.  In a first, I was wearing compression shorts to stave off the anticipated chafing that typically bedevils me in long events.  After my most recent negative experience with chafing issues in Vermont, it was time to try something different!

In another first, I also wore gloves (with the finger-tips cut off).  They too turned out to be very helpful - not just on the muddy downhill stretches, but also on the climbs up to Blackhead and Stoppel.  In addition to my hand held water bottle, I also wore a mini-back pack (instead of my fanny pack).  I used the pack because I wanted to put my handheld in it during the descents!  As it turned out (and mainly due to the wet conditions), I tossed it into the pack at the top of Windham and didn't bother taking it out for most of the day.  That would certainly not be possible during hot, dry conditions.  But I was glad for the pack this time around.

If I wasn't as focused on the way up, the descent off Windham quickly got my head into race.  I managed to pick up those couple of minutes I lost on the initial climb - by the time I reached the base of Blackhead.  But in something of a pleasant surprise, I picked up another 4 minutes on the climb up to Blackhead.  Was it the gloves?  At the peak I took a pair of Advil because I could feel the soreness in my legs creeping in.  Up to that point all I had to eat was a handful of Fig Newtons.

At 10.5 miles, I was about 2 hours and 45 minutes in and wondering about the next 8 miles.  Specifically, if it would take me 3 or so hours to finish.  Last year was my slowest Escarpment (at just a sliver under 5:47) and the final stretch from Estoppel to North Lake was always my slowest leg of the race.  But I felt pretty good at that point and thought I could run a lot more of that 8 miles than I've managed lately.

The compression shorts really did work for me.  Even though I was drenched pretty much from the get go, there was no chafing - not one bit.  Not only did I pick up some time getting down to Dutcher's Notch (always thanks to a gravity assist - haha) - but I picked up a solid 7 minutes on the climb up to Stoppel!  According to the Albany Running Exchange splits (below) it took 41 minutes (versus the 48 it took me last year)!  Must have been the gloves :D

But, gloves, pack, and even compression shorts aside, I knew it would be a good day when I ran most of the 4.4 final miles to the lake (when not boulder hopping after the last aid station).  Last year I distinctly remember having to walk stretches because I couldn't pick up my legs quick enough to avoid stubbing my toes on the rocks.  Not sure what was different, but I had no problem running the "runnable" stretches this time around. 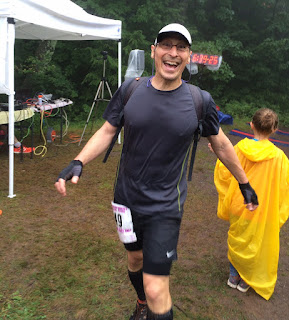 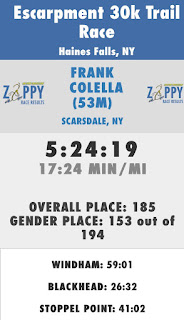 Posted by rundangerously at 10:53 AM