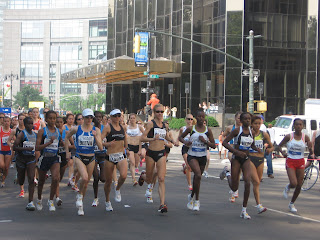 today's womens new york mini 10k, was a reunion of sorts: deena kastor, magdalena levy-boulet, and blake russell, fresh from their first, second, and third place finishes, respectively, at the olympic trials in boston this april, toed the line at the start on central park west this morning.

in hot, humid conditions which may mirror what they will find in bejing this summer, deena finished third in 33:14, magdalena fourth in 33:39, and blake took sixth in 33:40.

hilda kibet of the netherlands won in 32:43 (which, according to the ny times, was the slowest winning time in 10 years), six seconds ahead of madai perez of mexico, who finished in 32:49.

here are the results of the top ten finishers:

Posted by rundangerously at 12:02 PM

Great pics! Thanks for posting so fast. What happened to Deena, too hot or was she just coasting along today? Hope the training is going well. Good luck at Unisphere.

wow --great report and photos..we should have put a wig and skirt on you and let you run the race!! with all the reporting work you did..the photo of bea and me is fun -ironically she was asking about adamas, and adamas was out running during the race and said hi --good thing you took more pre-photos than after. seems like Deena is ready for the olympics..