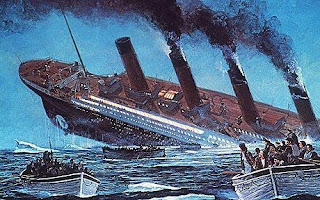 one hundred years ago this morning the titanic sank in the north atlantic, more than 1500 lives were lost. it was the ship's maiden voyage and just over 700 souls survived the sinking. news of the anniversary has blanketed the media this week. and this weekend has seen hours of t.v./cable programming on the story. james cameron's epic has been rereleased in 3d and is in theatres now (the original was bdcst on t.v. last night).

while i haven't gotten to caught up in the anniversary i have watched some of the documentaries - including cameroon's take on the story.  it was fascinating to learn that since he made the movie he's dived down to the titanic twice - and is still obsessed with the ship.  cameron gathered a dozen experts to definitively recreate the fatal hours of the ship.  while he wasn't going to remake the film, he did recreate an animated timeline of the sinking (redoing the original created when he was made the original film).

my only contribution to the collective wave of nostalgila will be a trip to the southstreet seaport musuem later this week to see the new exhibit, "titanic at 100: myth and memory."  i had wanted to get over there last week, but tax season business prevented it..   when i do get there, i'll post a couple of pictures - inlcuding one of the memorial lighthouse just outside the seaport :D
Posted by rundangerously at 7:00 AM