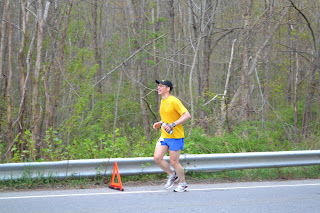 the 34th annual sybil ludington 50k on saturday was the 6th time i've run this race over the last 7 years.  in 2006 sybil was my very first ultra.  except for last year, i managed to make it back every year since.  that's despite the fact that each year i repeated swear it will be my last sybil (because of the traffic runners have to compete with over the course).  this year it would be my longest run since the mhrrc "recover from the holidays" 50k in january.  except for a pair of 30k races last month, i haven't gotten in any decent long runs this training cycle.

with that training backdrop, i had a 5 hour time goal in mind.  the course is one large - hilly - loop, starting and finishing in carmel, new york.  it traces the historical route sybil ludington rode on horseback to warn the colonialist that "the british were coming."  except for the first mile, mile markers were spaced at 5 mile increments (with splits for the half marathon and marathon distances noted).  i had a 22 ounce handheld with me for hydration (and a couple of gus).

all in all, it wasn't pretty - but it was fun.  as usual, i swore it would be my last sybil - especially since dodging traffic seemed unusually fierce this time around.  but i wouldn't be surprised to be there again next year :D
Posted by rundangerously at 1:24 PM