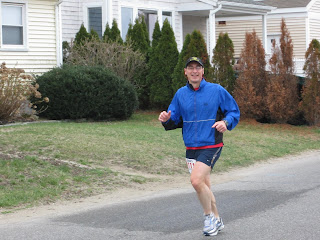 i didn't realize it had been 5 years since i last ran this race!  back in 2007 i ran the boston blowout 30k the day after the wurtsboro mountain 30k.  my 2:25 at wurtsboro was followed up with a 2:38 in fairfield.  the back to back 30k's weren't possible this year because wurtsboro was moved back a week - it's tomorrow, in fact.  aside from the passage of 5 years, another interesting fact i realized was that this was the first year in  a very long time that i ran all 4 boston build-up races and the blowout.  i did the complete 4 race series last year, but missed the blowout.

the blowout course is basically a 15k double loop.  it's a very flat course - with no notable hills to mention (a couple of dirt steps to reach the nominal trail section and some speed bumps here and there).  my time goal was a sub-2:30 finish - just over an 8 minute pace.  as it turned out, my 2:34, 8:16 pace, missed that target by a solid 4 minutes.  i ran the first loop too slowly, and even with a negative split for the second loop, a 2:30 finish wasn't in the cards.

even so, it was a fun morning.  before the race kicked off, the west point marathon team made jim an honorary member - and awarded him a framed team patch!  once we were officially underway, the weather was great.  despite predictions of rain in the days leading up, only the threat of rain hung over us in the form of heavy cloud cover.  there were a few drops toward the end, but for the most part the only weather-related issue were the heavy wind gust along certain stretches of the course.

i wasn't too disappointed with that time.  given the easy first loop, it was unlikely that i could have made up 6 minutes on the second half.  however, i did manage to pick up two minutes with the 1:16 second loop.  all in all, it was a good day.  tomorrow, with what might be similar weather conditions, i head over to sullivan county for the wurtsboro 30k!

here are my race photos.
Posted by rundangerously at 11:00 AM