The 2017 edition of the R-U-N 5k in Central Park (as distinguished from its Prospect Park cousin) was hot and humid - even at the 7 PM start.  The heat/humidity was 78/78 on the walk over to the start on West Drive, from race central (which at roughly 10 blocks, was almost a quarter of the race distance)!

Despite the heat/humidity it was fun running in the park at night!  And Peter Caiccia, during his pre-race announcements let slip a "good morning" runners - just to see if we were actually paying attention :D

As for the race itself, it was a crowded first mile (I was at the end of the first wave, corrals A-C, and it took me a solid minute to cross the start line.  I ran just under 7 minutes for that first mile, and that was all the speed there was before the humidity took its toll.  My 23:17, 7:30 pace finish, was a huge relief!  The last mile turned into a real slog for me :(

Here are the official race results from NYRR.

Next NYRR race  Club Team 5 Miler to kick off August! 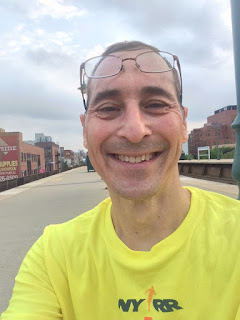 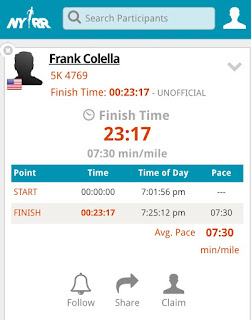