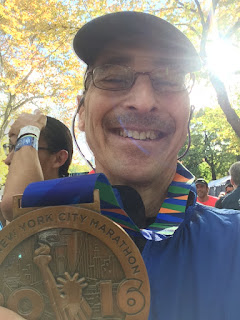 The 2016 NYC Marathon is in the books!  By the numbers, it was my 14th consecutive NYC Marathon!  It also capped off my 9+1 requirements for guaranteed entry for the 2017 edition - so, God willing, I'll be back next November for #15 (it is my all time favorite race after all) :D

As for the race itself, after running a 4:10 last year and the year before that one (2015 and 2014), I got something of a groove back and came in below 4 hours, with a solid 3:57:42 finish.  It was all the more satisfying because for the 3 year in a row I started off the race with a relatively poor base, averaging just 40 training miles a week during September and October.

I did run 4 half marathons during those 2 months and one long run of 15.5 miles.  But that's far from an optimal training plan.  For the second year in row I just could not get in the runs during the work week, leaving me with Saturday and Sunday to log 20-25 miles.  It's  not for a lack of running motivation, but rather a more onerous teaching schedule.

The summer was a different story, which included a pair of 250 mile months back in June and July.  The base was there, just not close by - haha.  It was a good deal muscle memory that got me over the course.  I say that somewhat seriously because while I expected to hit the proverbial wall, it never happened!  I did slow down over the last 5 miles but I didn't need any walking breaks.

As for the nitty-gritty of the race itself, I ran a 1:56 first half and a 2:01 second half.  I can't help but smile as I write that because our minds love to play tricks on us.  Running up First Avenue I was harboring the completely humorous illusion that I could run a negative split (and win a free pair of running shoes from Strava - haha).  While half my brain clearly understood the simple math of pace, the other, more idealistic, part of my brain refused to engage reality :D

I will say that, despite not having a real chance of running a sub 3:52 that day, the goal of running a negative split did pull me along "fast" enough to run a decent sub-4 hour finish.  For that I'm very grateful that half of my brain (or maybe it was really my heart) held out for the negative split!  That said, next year, after number 15 is in the books, I'd like to summarize the lot of them (3:20 to 4:10).

A couple of race observations - this year I was in the green corral and began the race on the lower level of the bridge.  Not my favorite place to begin, but as my friend Eric pointed out on the bus ride to Staten Island, it meant a smaller hill to cross!  That did make me smile (and, despite the oft-repeated urban legend, no umbrellas were needed crossing the lower level).

On the Brooklyn side (and easily this Brooklyn boy's favorite stretch of my favorite race) I looked forward to seeing my mom at Bay Ridge Parkway and Fourth Avenue.  She is my number one fan on the course - having spectated at almost all (seriously) of the 14 I've run.  I think she's only missed 1 (but no more than 2) of my races.  God bless all moms out there.  They are amazing!

Also on the Brooklyn stretch (along 4th Avenue) - one of the all time worst race moments of all-time!  I pulled off to use a porta-John, waiting patiently for the one in front of me to open up.  Another guy was pacing impatiently up and down the other 5+ occupied ones.  "My" porta-John opened up and as I got in he grabbed the door and said menacingly, "I got this one!"  Part of my was about to laugh in his face, but I ignored him and turned to do my business.  Amazingly!  And I will say this again - Amazingly - he pulled open the door and screamed for me to get out!  In one of the only times I ever directed an expletive at someone (other than a car driver) during a race I growled back at him "Get the f*ck out of here!"  Despite my partial immodesty, I was ready to punch him in the face (forget the laugh).  Luckily, for him - another one opened off and he ran over to it.

The silver lining here, if any, was my adrenaline level shot thru there roof.  So I had no trouble flying down 4th Avenue after that sideshow.  I wonder if he would have been as threatening if he hadn't been twice my size?  Or maybe it was the desperate urge to relieve himself that caused the scene.  Be that as it may, it left a bad taste in my mouth for a couple of miles.  By mile 8 it was old news.

Running the remainder of the race was completely uneventful.  I just kept my focus of keeping it together mile by mile.  I love crossing the bridges (hills they may be) - so I looked forward to them.  Even so, my lowest point (mentally) is crossing the Queensboro Bridge into Manhattan.  That sounds crazy, considering the wall of sound that awaits at the Manhattan side, but the typically windy and seemingly endless stretch never fails to get to me.

First Avenue itself, however, is another story.  I love this stretch - even though it's also mentally challenging as we get closer to the Willis Avenue Bridge.  This time around I felt pretty strong during 1st Avenue and over into the Bronx.  I had eaten an Expresso Luv Gu as I came into Manhattan and had a Tangerine PowerGel up at the mile 18 station (2x caffeine) - so I was very alert.  The caffeine did it's magic and I was fine for the rest of the distance.  I had another Expresso Luv Gu tucked into a compression sleeve, but never needed it.

As I mentioned, even though I slowed down in those last 5 or so miles, it didn't seem that way until I reached the Park.  In fact, it wasn't until mile 25 that I felt the wheels coming off the bus.  I was on the edge of 4 hours - and would only come in under 4 if I kept running.  I could have walked it, but that would have kissed a sub-4 goodbye (although I probably would have finished sub-4:10, ahead of my prior two finishes).  Thankfully I managed to keep it together :D

And, as always, regardless of the actual race, the toughest part of the day was the dreaded walk to the baggage bus!  Do I exaggerate - yes, but it is a dreadfully long trek to get to my dry clothes!  One great new thing this year was having the Tour buses parked on Central Park West, just north of the Family Reunion Area.  That was simply fantastic - as contrasted with the walk down to Lincoln Center where our buses were parked in years past! 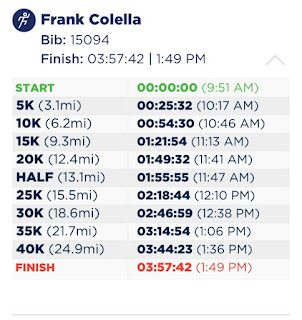 Posted by rundangerously at 7:36 AM