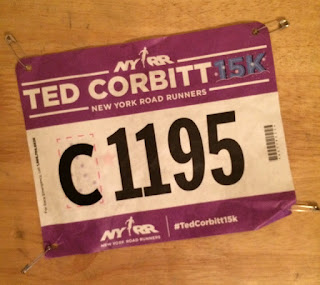 I should really strike photo from the post title since my phone died/froze right after I crossed the finish line of the Ted Corbitt 15K this morning!  But I'll add a link to the NYRR Photo Gallery to make up for it.  There seemed to be a slight chance the race would have been switched to a fun run when the NYRR sent out an advisory that they were monitoring the weather conditions and would let runners know by 6 AM what to expect.  Luckily (as this was the last Club race of the year) the race went off as planned :D

As for the weather it was chilly (but not really cold) - hovering just above freezing at the start.  The real concern was snow - which actually held off until the race got underway (with slight flurries as we left the chutes).  But it did pick up - and by the second loop it was bona fide snowfall accompanying us to the finish!

I didn't have any expectations, time-wise, for my performance.  There was an outside hope I'd run a 1:15 (8 minute pace or so).  But given how beat up I felt after last weekend's BUS Trail Mix-Up 50K there wasn't any speed left in my legs.  Still, my 1:16:51, 8:15 pace, finish made me very happy!  As a bonus, got to say hello to Gary Corbitt (Ted's son) as on the 102nd Street transverse during the first mile!

Here is the link to the NYRR photo galleries. 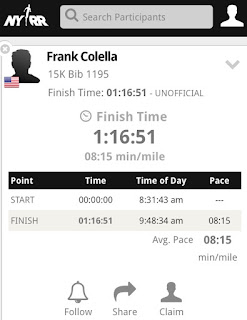 Posted by rundangerously at 9:00 PM