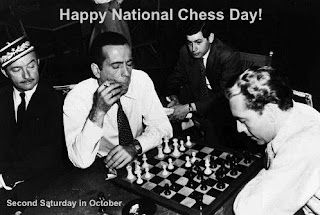 Who knew that the second Saturday in October is National Chess Day!!  Pretty Cool :D

Apparently, it goes back to the administration of President Gerald Ford - he announced it on October 9, 1976 and designated its observation for the second Saturday in October.  Today is its 42nd anniversary.

I'm going to try and play a game online (at RedHotPawn) to celebrate :D

Posted by rundangerously at 1:39 PM