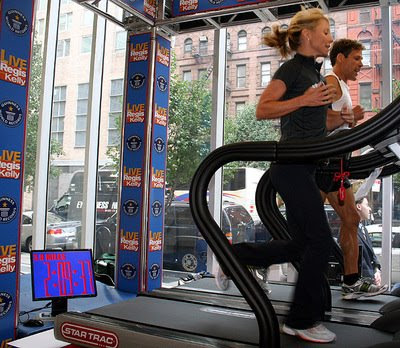 dean karnazes just finished his quest to break the guinness world record for the longest distance run on a treadmill in 48 hours. unfortunately, his 211.7 miles (unofficial) was well short of the record, 240+ miles. but back to back 100 milers on a treadmill is an incredibly impressive accomplishment. the event was part of the week-long theme on the live with regis and kelly program (each show this week featured someone trying to break a guinness world record).

the best part of this stunt was that new yorkers could catch him running on the treadmill, live, at the abc studio window at the corner of Columbus avenue and 67th street (others could watch him run via the webcast).

this isn't the first running-themed stunt sponsored by regis and kelly. earlier this summer they put on a women's only high-heel-a-thon (a 150 yard dash in high heels in central park)! 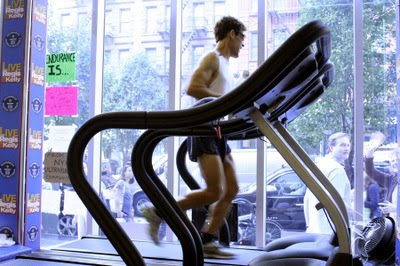 check out the cool gallery of photos at runners world.

Posted by rundangerously at 10:08 AM

I'm so bummed that I wasn't in the city. Boyfriend lives less than a block away - it would have been SO cool to see Dean every time I went back and forth!